<p>Sebastiani’s first century in Sonoma winemaking began when Samuele (pictured right) emigrated from the Tuscany region of Italy in 1895 and started Sebastiani nine years later. A stonemason by trade, he quarry-mined the Sonoma hills for cobblestones that were used to build the streets of San Francisco. He worked long hours and saved carefully to buy land in Sonoma County, from which he would make wine for the Sonoma community and San Francisco’s restaurants. The winery was the only one in Sonoma County to continue operations through Prohibition, making a small amount of sacramental and medicinal wines. It has been joked, and perhaps with some grain of truth, that during this time there was a resurgence of people becoming very religious. Samuele believed in hard work and asked the same of everyone at the winery. At the same time, he was a strong supporter of the land and the people of Sonoma. When the combination of Prohibition and the Depression hit hard, Samuele initiated major projects at the winery to create employment for his neighbors. When there wasn’t sufficient work at the winery, he built around the plaza and constructed a skating rink, motel, theater and meeting hall at the Catholic Church. To keep people employed at the winery, Samuele began canning peaches, pears and nectarines. Shortly after Samuele’s death in 1944, his son, August (pictured right), and August’s wife Sylvia purchased the winery from the estate and began the expansion of the facilities and the product line, adding new varietal wines and proprietary blends. The Sebastiani company’s biggest growth spurt came during this time. The family built a large-volume, Central Valley-based portfolio of value brands, collectively called Turner Road Vintners, while continuing to produce its Sebastiani-labeled wines. Production of Turner Road Vintners brands reached 8 million cases a year. With the decision made to refocus on quality and the flagship Sebastiani brand, the family sold the Turner Road Vintners brands and winemaking facilities in March 2001 to Constellation Brands (formerly Canandaigua). When that sale was completed, Don Sebastiani left to devote full attention to Cecchetti Sebastiani Cellars (now Don Sebastiani & Sons), which he started with brother-in-law Roy Cecchetti in 1985. Mary Ann Sebastiani Cuneo, formerly senior vice president of hospitality and manager of the company’s real estate holdings – which include 700 vineyard acres, 225 of them planted -- assumed the role of president and CEO and helped lead the company through its transition into one of Sonoma County’s premier quality wine producers. She spearheaded the multi-million dollar remodel of the Sebastiani tasting room and hospitality center completed in 2001, offering unique cultural and historic programs for visitors. In addition, the production facility underwent major renovation with an emphasis on small-lot artisan winemaking. Bill Foley purchased Sebastiani in 2008 and immediately took a number of steps to enhance wine quality and raise the winery’s image. Working closely with winemaker Mark Lyon and the viticultural team, Bill lowered production, restricted yields, acquired more new barrels and winemaking equipment, revamped farming protocols and acquired additional vineyards to guarantee consistent and superior fruit sourcing. Today, the winery is making the finest wines in its long history with emphasis on single-vineyard and sub-appellation wines.</p> 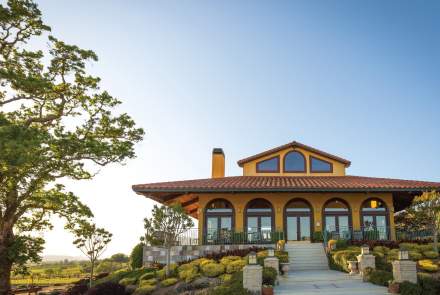